The next installment of my Ork NetEpic Gold army is here. This time I have painted the Death Skull clan. This clan allows me to pick two mobz that normally would require another clan to take. While I don’t really use that in my list, I thought they’d come in handy on many occasions.

Rather than basing them on a particular image or paint scheme, I browsed through a bit of old White Dwarf magazines and then closed my eyes to imagine what the Death Skulls should look like. I wanted to continue my ‘pang’ spot colour focus from the Goffs, so I decided on a red, a pale yellow and two blues. The recipe for painting Viking style Death Skullz is given at the end of this post. 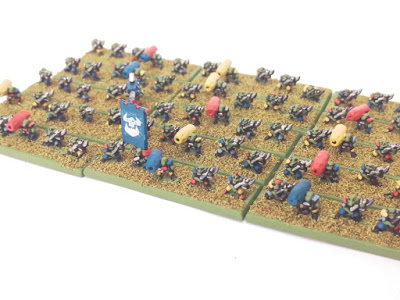 The banners were made with transfers from Gorkamorka and third edition Warhammer 40.000 Space Orks plastic boys. While the iconography may be a bit too modern, I think it is a fair compromise between branding and school. Ideally, a bit of paint would be added to cover the transition between the transfers and the banner, but I did not do that. I find that highlighting the transfers integrates them a lot better, and I might do this.

To deleniate the Goffs and the Death Skullz further, I chose to use almost exclusively nobz without back banners. I had a fair few of these lying around and thought that Blood Axes and Death Skullz would be the best use for them. I didn’t bother with the eyes and the teeth on the nobz this time. I might go back and redo it at a later point.

When I read other blogs or watch posts from other hobbyists I often find myself wanting a complete rundown of what has been made. So as a bit of service here is the recipe for Viking painted Death Skulls:
Colours used:
Vallejo Pastel Blue
Vallejo Blood Red
Vallejo Chainmail Silver
Vallejo Medium Blue
Vallejo Deck Tan
P3 Sulfur Yellow
Coat d’Arms Goblin Green
GW Black Templars Black
I basecoat the miniatures black first (any black will do, but I prefer slightly satin ones like the Foundry, as it gives a deeper black).
Next I colour in the various armour and heavy weapons. The strategy here is a random pattern of yellow, blues and red. The Death Skulls make do with whatever they scavenge and so it is important that they don’t look too uniform. I am not a fan of painting the heads blue on Death Skulls as it stops them from looking like Orks to me at this scale. I keep that in 28 mm scale. The heavy weapons get some flame patterns or similar.
After the basics have been added, I colour the boltguns in silver. The Goffs had red bolter casings, but that will not work for the Death Skulls as it gets too confusing to look at. I make sure to leave plenty of black showing to “line” the different parts of the miniatures. I find that this works well when viewed from afar.
After the bolters have been painted I start colouring in the skin of the orks. Here I prefer goblin green straight out of the pot. I try to paint first a line from forehead to mouth and then colour in the cheeks and lower jaw to leave a black line for mouth, and two black spots for the eyes. It doesn’t always work out, but then I just touch it up with black wash afterwards.
Lastly the base is painted in goblin green before adding scatter material. This helps to improve the effect of the scatter material and gives it a bit of colourplay.
The back plate of the Ork armour is used for attachment of the banner pole in 40k or to display the clan symbol. I just paint it in off white grey as shown in step 5.
Lastly I cover the bases in diluted PVA glue and add medium olive green flock. This product from K&M scenics is available from Kallistra in the UK. I find that it closely resembles the flock used back in the day, which I like.
Once dry, the bases are sealed with a coat of diluted PVA with a drop or two of surface tension breaker (for dishwashers). With reduced tension the liquid quickly seeps through all the flock and fixes it firmly.
That is another 500 pts knocked off the army. 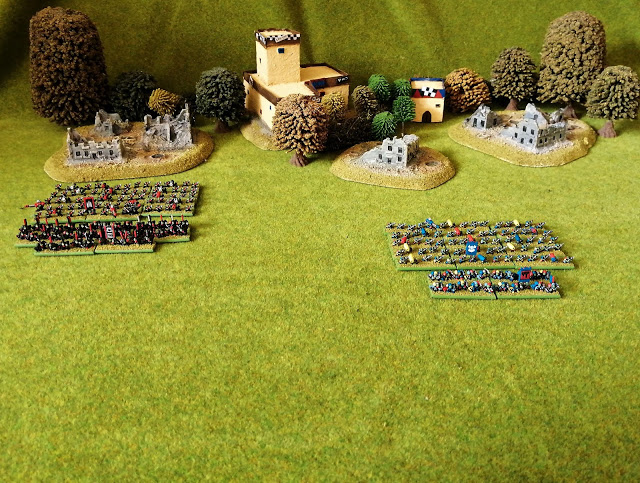 Let us have a look at the list then:

Still 53 models to go… it’s a long way to the top if you wanna rock and roll!