The fourth and probably by far the hardest month of the 2nd ed. army challenge has now expired. Unlike the earlier months, but not totally unexpected, a few participants used their mulligans this month. The challenge runs for 6 months, while only 5 entries are required/aspired to.

For those who made it the challenge trackers have moved instead of more jabber from me, let’s turn and see what the guys have been up to! Presented here in the order in which they have been received, and in their own words, are this months entries:

Hi folks,
This month I made a start on my final unit of the challenge. When complete, this Tactical squad will provide the solid foundation my army needs to operate properly. Most of these models are from the first box of Space Marines I ever bought! The sergeant, however, is a new acquisition; I have enjoyed some really inspiring support from local 2nd Ed. traders here in Sydney. With no special or heavy weapon in this offering, I lavished a little extra time on painting a “fabulous” plasma pistol. 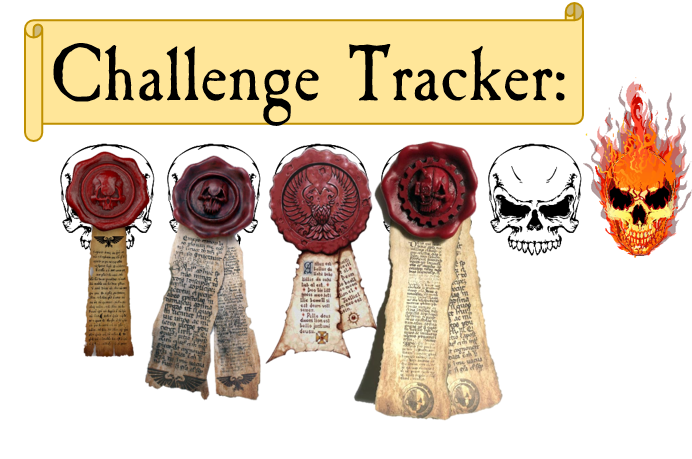 Greetings loyal servants of the Imperium and welcome to the 4th installment of the 2nd ed army challenge! This month sees us getting closer to the business end of the challenge and so I thought it fitting to introduce Brother Hephaestus (33pts) and the his beloved Predator Destructor “Baal’s Hammer” (120pts). Both models required a lot of effort to rescue and I have used a mix of V1 turret and V2 sponsons which I think actually worked quite well. The heavy bolters were sourced from a newer Razorback and are the only parts in the entire project that are not from the original era and the autocannon barrel is of unknown origin and I only realised it wasn’t original when it arrived thanks to ebay trickery. Still, I am very happy with the results and look forward to getting to the last installment next month.

A big model count last month meant I could do just one model this month! I had a few unfinished projects kicking around so just doing one model for the challenge freed me to do that.

But it’s a very expensive single model, with a psychic hood and witchblade this one weighs in at 210 points.

This would have to be one of the earliest 40k models I remember seeing, one of my friends had him painted in the traditional res scheme. It was great to get one of these old Farseers when GW did a reissue a few years ago.

Mine is painted as Iyanden in a scheme I borrowed from a site I found called golden-throne.com—some cool old stuff on there, thanks for the inspiration!

With this done just the Warp Spiders to go. Both excited and intimidated by them, so we will see!

This month, I was able to paint the other Rhino for the force and take an army progress shot. Heading into the Christmas period will give me some time to paint the Thunderer Heavy Weapons Squats. Having painted the previous Rhino I followed the same colour scheme which made it easier to paint and took out the guess work.
I’ve enjoyed seeing the force take shape and now that we are over half way and the finish line is in sight i’m looking forward to completing the next couple of units.

November, busy November.  I started with such plans. Having gotten accidentally so far ahead last month I decided I could finish it all pretty quickly.  11 squats to go.  I assembled and primed about another 20 in addition.  Then disaster struck, I got a girlfriend…..
As the final days before entry approached I abandoned any pretense of extras.  I had a solid run of one evening where I did an ok job of finishing my specialist squad of 5 – these are the uparmed bolter squats that get in and do the dirty work.
I left the hero thinking I didn’t have time to do a sufficient job on him before the deadline.  The last squad of 5 would definitely have to wait. On the last evening, a reprieve….  My girlfriend had a late shift, I sat down for a solid hour and finished my hero.  Finished basing the 6 and got a decent photo.  So, Bolter/plasma squad – 88.  Hero with power glove and bolter – 53.  131 points – a bit under the normal 200 point per month.  But still ahead as a whole on 932 points. Will definitely finish next month and start on the ‘over and above’.

This months entry has a slight change from what I submitted, but I think the reasons will pass muster. I was originally going to paint the captain with power fist as my headquarters. He had already been painted, and I discovered a Colonel “Iron Hand” Straken in the box I bought from my buddy. I figured I’d rather paint someone new then use the already painted guy! I also reviewed the figures in the box and discovered I somehow over counted my regular guardsmen, and under counted my special weapon guardsmen. Because of this I replaced some lasgun guardsmen with extra special weapons. I am replacing the first entry with the second. Oh and I added a Vortex grenade because are you really playing 2nd edition without a Vortex grenade? Colonel Command Squad – Colonel w/Power fist and boltgun, guardsman w/plasma gun, guardsman w/ comm link – 138 Colonel w/ Bionic eye, Bionic arm, Vortex Grenade, plasma pistol, shotgun, w/plasma, grenade launcher, multi-melta, Comms 206 So, with the command squad and the mortar teams this month I’m at 326 points. It’s the first time I’m over on points all Challenge! Two months to go!

The marines of Squad Scalprum did not quite make it over the finish line this month.  There were too many details to rush through and I wanted to take my time instead of just finishing for the sake of making the deadline.  Fortunately my December painting for this project is only two character models so I will have plenty of time to finish these troops of the Devastator squad to the level I would like and paint my Dark Angels Captain and Techmarine as well.  If you would like to see these models when they are finished or any of my  other 40K projects, check out my blog at:   https://1stlegionchronicles.blogspot.com/

Hello,
Nov 100pst and bonus model. This month for me was about 2 ancient chariots. 2 Chaos space marine Rhinos. These ancient chariots that have seen thousands of battles in hundreds of systems , been blown apart and put back together by the dark tech priests and Iron Smyths within the legion, always ready to drive into the war zone to deliver the hulking Chaos space marines inside. These guys  were are challenge as one of them was a rescue job with missing plates and weapons. I’m happy with how they come out and it all adds character to the army. I also had time this month to add a model that’s been sitting on my shelf spayed for about 15 years and that is the Greater Demon of Khorne , a nightly Bloodthirster, hope you like. Iv only got Noise marines left to go. So I will be digging though boxes to find extras to add in.

Intercepted message nailed to squigeon:
“Me and da lads ov da ‘Undred and Lots Stormboyz ‘az secured day base you wuz wanting, boss, from da armoured snake humies.  Oh, but it wuz a fine scrap.  Da Kommandos you sent, dose Mountain Banditz, de did alright too, I guess.  And da humies don’t even know we wuz ‘ere.  ‘Cept fer all da smoke.  And da corpse smell.  And dis blinky ting on da shiny one’s arm.  Mebbe wez jest be moving on now.  Wez still expectin’ our teef back at camp.” Thanks to Spencer for his Salamanders this month.
This Month: 175
Total: 749
Next Month: Slow and Ponderous

Under the scorching desert suns, battle rages across the dunes. The crack of the trusty lasgun answered by the burst of the bolter, accompanies the screams and shouts of war.
The Tallarn Infantry holds fast their line, as the traitors lays heavy on them. Sergeant Sulan scans the enemy line through his binoculars…”we could really use those reinforcements”, he mumbles under his breath. looking at the grotesque sight of the Blood skulls, his only relieve right now is the distance to the enemy line. He picks up the horn of his vox caster, ready to make another call…when he feels it.
The first sensation, is the small vibrations in the floor. If you look closely you can see how everything starts shaking, the rattling of metal on concrete floor, dust falling from the ceiling. Within seconds the noise of roaring engines starts rolling in over the dunes, drowning out all other noises of battle…and then the thunder. The sonic boom of the artillery as the massive cannons opens up, raining death and destruction across the enemy line.
The vox channel bursts to life with praises to the emperor and Tallarn, as the troops along the trenches welcome the reinforcements. Sergeant Sulan, smiles as he takes in the sight, of the tanks plowing though the dunes, like ships in the sea…”today is gonna be a Tallarn day after all”.
————————————————————–
This month, I did exactly the opposite of the previous months, doing only one “model” and a little “cherry on top”.
The Leman Russ Demolisher, has always been one of my favourite tanks. Really love the short fat barrel and the power it delivers. Some time ago I managed to get my hands on an old version of the tank, with metal plasma cannon sponsons, so naturally I had to do it for this challenge.
The “cherry on top”, being the original FW Tallarn Tank Commander, who had been waiting to be deployed for almost two decades. This fella however haven’t had time to do battle yet, so both he and his tank has still to be named.
I painted the Demolisher, using the same colors and style as all my other tanks, like I have done them since the beginning. Right now it’s ‘out of the box’ brand new, but as it will see battle in the future, so will the tank see battle damage.
Leman Russ Demolisher @ 250 pt.

This month I painted … nothing!

So what happened – well it started out pretty good. I then got sidetracked with a bit of fantasy, which turned into a lot of fantasy. I was still doing pretty good actually, but then the final weekend came around and I was going to paint up my predator… and life happened – the weekend washed away with other kids related activities and so on. You know the drill. Well, I did not expect to see myself using the mulligan, but it pretty clearly shows why it’s there: to cope with the unexpected!

Next month I will try to double back and complete both the predator and a squad so that I am back on track.

The final wave of entries is up now featuring among others, this insane 147 models gamer's pledhe by Slice of Dice!
The #40k2ndAC IV deadline is 20th of Dec. But as I am impatient, here another 10 entries have been uploaded! Enjoy!
@grimslath was the first to join the #40k2ndAC IV which takes off in 2023. He is doing a Painter's Challenge, painting Blood Angels.
Let's celebrate the first ten entries for the #40k2ndAC IV. Link in bio.
My #40k2ndAC army, painted earlier this year, has been on the field again!
@enfenix_miniatures you are my hero!!!
Loading Comments...
%d bloggers like this: