Yesterday I had a battle of Dragon Rampant with my fellow gamer Dr. Zombie.

The fair city of Dönerdorf is located somewhere on the outskirts of the Empire. Recently an odd looking warrior caste led by the fearsome Khong Lhort has become the rulers of the nearby castle. They don’t take easy on lasiness and they’ve halved all the corn allowance for the peasants in the city.

In their wisdom the peasants have decided to riot against their new masters. Little do they know that these warriors are actually praying to the Dark Gods.

To their great fortune a druid has come to their aid from the deep of the woods, bringing with him magical fantasy creatures in the form of Lilliputians and Owlbears.

The fair city of Dönerdorf. All is peace and quiet.

The town levy has decided that staying in the watch tower is the manly thing to do. 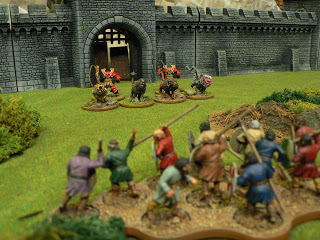 Gronk and Kronk – The Beasthandlers were unleashed on the raging peasants. Surely they could instil some fear and get this thing done.

While some of the peasants were very eager to get fighting, others felt it was more wise to stand back and cheer… until the outcome of the wave was certain.

The Men Who Are Goats also emerged from the castle. Now the locals realised that they were indeed fighting and unnatural enemy!

Smargl’s Warriors of Chaos also emerge to bloody their axes.

And last but not least Swiney Trott and his pig men also join the fray.

Finally even Khong Lhong on his strider enters the battlefield to show how it’s done.

The druid and the Lilliputians press on. Their quest is certain and their aim is true.

The Men Who Are Goats kill off peasants with their mighty axes. 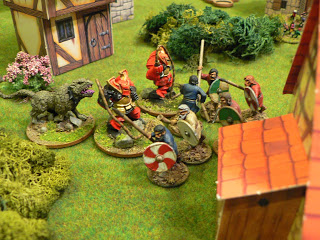 Gronk and Kronk start hacking themselves as their hounds have died. 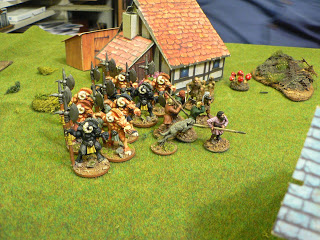 It is a slaughter

The Lilliputians valiently charge Ymgori, Sheep of Chaos. Will they defeat the monstrosity?

The druid spells out his spells!

Eventually the Lilliputians are trampled and hurry back to the woods.

But as Ymgori charges them, they manage to countercharge and beat off the Sheep. 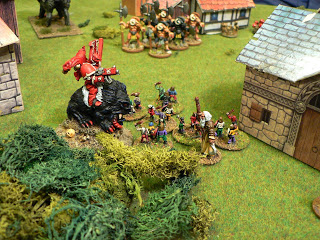 Khong Lhort charges into the Lilliputians and kills them off! But a few of them manage to sneak up his armour and give ham a few wounds. 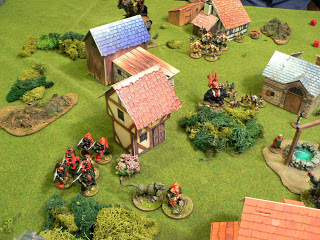 The battle looks but lost.. and Lhars the Druid is no more.

But then the Owlbears of the forest finall arrive.

Gronk and Kronk are smacked flat… 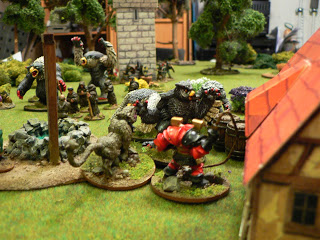 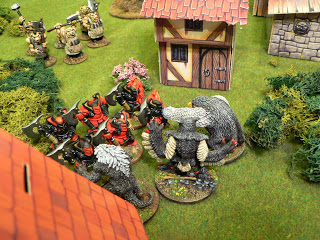 The birds charge directly into the next unit – Smargl’s Warriors.

Khong Lhort sees them and fires his mightly bolt pistol at them without hitting anything, but still making enough noise to confuse the noble beasts.

Swiney Trott steps in to finish them off. 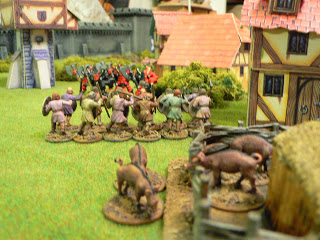 The remains of the peasants have retreated to the pig pen to make a last stand.

Smargl is not intend on letting them get away with it. 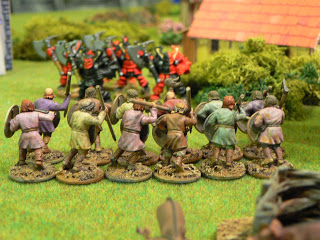 The brave town levy is still sitting in their watch tower.

Khong Lhort has retreated to his castle after being seriously injured.

After being assaulted by the Men Who Are Goats the town levy finds their inner courage and charges after the remaining three goats.
The battle ends. The peasants have all been killed and the future of Dönerdorf is uncertain.

@enfenix_miniatures you are my hero!!!
@m4cr0dutch painted this Painter's Challenge entry in 40k2ndAC III and not an eye was dry! Splendid painting and subject.
We're having another go in the new year. Are you a painter or a gamer? Join in on the fun. 50 seats. Deadline December 20th.
The #40k2ndAC has seen a fair share of Eldar armies over the years, but this was the first one. Painted by Peter Hartree. Magnificent work.
Back 2020 @tains_miniature_painting painted this awesome Blood Angels army during the #40k2ndAC I
First game of heresy for me! What a blast. Not too far from the 5th ed 40k I left some years back.
%d bloggers like this: