The games I play are few and far between, but I do enjoy it when I have the possibility. This Wednesday my good friend of Janner’s Jaunt (jannersjaunt.blogspot.com) overcame the difficulties involved in driving all the way to the murky hole in which I live and have a game of Lion Rampant with me.

We decided to go for the Dark Ages with an alternative narrative in which a Welsh warband desperately attacks a village that has been sieged by the Normans during the forays into Wales following the invasion. Both army lists and scenario was otherwise straight out of the rulebook.

I chose to field what I considered a completely bog standard Norman list with a little bit of cavalry, a little bit of infantry and a single bit of crossbows. I would have preferred to field archers, but didn’t have any painted up yet. My force would of be let by no one else but Davide Beauvie – the infamous Normanic leader known to his troops only as Le Duc Blanc Filiforme and for taking great interest in cultural stuff like tapestries and playing the lute!

Well on to the game. In this scenario the Normans were simply to defend the central object of the village (a pig pen as it turned out). I put my unit of crossbowmen in the pig pen. My Lion Rampant knowledge was a bit rusty but it seemed like an obvious choice given that there was a nearly open view of everything from the pen. 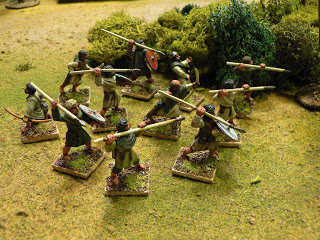 Janner had made a really characterful Welsh list I think. It was filled with skirmishers and cavalry with javelins that could jump back and forth not unlike Eldar in the olden days. Initially I felt pretty sure I would get my ass handed to me, so to speak.

I could only fit two units in the 8”x8” square in the center of the table due to the ‘zones’ of 3” that units must be from each other. But as it turned out it wasn’t so bad. Th crossbowmen were joined by a unit of serjeants.

The rest of my warband started at the eastern table edge (narrow) and immediately started moving across the table. The iniatial rounds went just fine and saw both me and Janner doing something with almost every unit before failing a command roll. Both our commanders had a special ability that allowed us to reroll the first failed test when within 12” of the commander.

Eventually all my troops had encircled the pig pen and I ran out of ideas of what to do. It was a bit of deadlock as I only had one shooty unit, and didn’t feel like trying to flush the Welsh bastards out of the bushes they were hogging. At a point strange sheepish noises even seemed to come from one of the shrubberies.

The Welsh cavalry could only shoot their javalins 6” which forced them to get really close to almost going out of the cover… The Normans simply moved further away from the woods. Charging did not seem like an option given all the different penalties and boni that would be added and subtracted. In other words – the Normans knew the difference between a Welshman in the open and a Welshman in a shrubbery.

By a token out mistaken braviour the Welsh leader was running headlong down the road with his trusted cadre of elite fighters and no cover in sight. The Normans were quick to aim their crossbows at them and set free a few of the misguided souls. After that experience the glorious Welsh leader decided that hiding in the bushes was perfectly acceptable for even a Welsh leader.

The ferocious welshman couldn’t hold back their enthusiasm when the Norman cavalry came within in distance. Initially they charged with some awfully clingy shrubbery around their ankles trying to fool the enemy. When the hotheads finally realised their predicaments and that the Normans took more that a few twigs tied to the arms to turn, they turned their tails and fled. 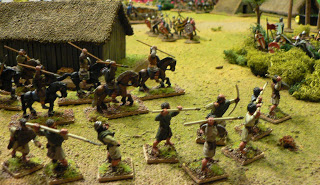 As the Normans pulled back and used the Welsh’ tactics on themselves the brave Welshmen decided to charge into the cover. Even though the odds were in their favour the outcome was not and the last remnants of hope for saving the village from the invaders faded from the faces of the Welsh people.

The rest is of course history.

I would like to thank Janner for a nice evening spent even if the game ended up being a bit lopsided. He is unfortunately (gaming wise) moving to another part of the country in the next few days so gaming will probably be even less frequent now. Or perhaps even the other way around, now that we are forced to arrange things a little more in detail.

@enfenix_miniatures you are my hero!!!
@m4cr0dutch painted this Painter's Challenge entry in 40k2ndAC III and not an eye was dry! Splendid painting and subject.
We're having another go in the new year. Are you a painter or a gamer? Join in on the fun. 50 seats. Deadline December 20th.
The #40k2ndAC has seen a fair share of Eldar armies over the years, but this was the first one. Painted by Peter Hartree. Magnificent work.
Back 2020 @tains_miniature_painting painted this awesome Blood Angels army during the #40k2ndAC I
First game of heresy for me! What a blast. Not too far from the 5th ed 40k I left some years back.
%d bloggers like this: