Jonas and I played another game of Zulu War. He and I are probably the only two people in Jylland interested in the period and we don’t adhere strictly to history in our games.

In fact most of our games start with a little ritual in which Jonas asks ‘can I has a steam tank? Can I has steam gorillas’ and so on (I suppose I better get used to it if I intend to play some games with my kids too… only they’ll be wanting dragons and lasers). I’m sure it underlines that even though we are both interested in the same period our views are still different. I actually think the conflict offers a lot of adventure on its own.

But anyway! We arranged a bit of greenery around a road and the basic scenario was simple enough:
[i]The Zulu Nation had besieged a mission station and the British were on their way to relieve it. Parts of the British force came into contact with elements of the Zulu army and so it began.[/i]

Rules wise we used Triumph & Tragedy. I think this set is well suited to the period and the amount of figures we use. I would probably skip a lot of the micro handling (weapons, close combat distances and the like) to make it a bit more fluid the next time I field 96 Zulus.

Apart from the Shooty Hornies all had throwing spears.

Scenario wise, the British simple had to cross the table and free the way station on their way to the mission… never mind the 96 Zulu warriors!

The Zulu Line up

And the British counterpart

The Shooty Hornies and the Bland Horn

One of the Young Horns

The Other Young Horn 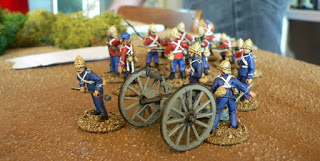 A just as devastating British cannon

Volley fire turned out to be quite deadly. Here the British managed to miscommunicate and place a unit in front of their cannon. Phew!

We used event cards during the game. However it was rather lop sided. All events barring one were harrowing the Zulus. We need to make some period specific ones… all the bonuses in this deck were taken out because they didn’t suit the theme.

In fact a lot of Zulus attack! My plan was to use their good going in terrain and advance up on the flanks while feinting a bit in the middle.

Apparently my warriors started having dick skin on their feet…

Deadly volley fire. This attack was devastated. I didn’t know what to do after having taken a volley and pushed on even though I had 137 suppression markers on them. Of course they were wiped big time.

My Shooty Hornies fared no better. IN fact – during the whole game they failed to score a single hit even though they shot each turn. In the spirit of Nigel Stillman I will of course keep on taking this unit to battle.

Jonas had not bought leaders for all his units which made some of them incapable of volley firing. If he had had a baggage train and 2 more leaders instead of the rocket and cannon I would have been toast. In fact I’m guessing the only reason we had as long a game as we did is due to this fact.

A weird situation happened when my Little Big Horn fast moved towards the Red Coats but only using a fast move and not a charge. For all intends and purposes they wore on the charge, but just didn’t get far enough. So even though they were within 3” they never fired their throwing spears but simply stood and got shot to pieces. 🙂

I did manage to get the artillery taken out. Sheer mass of bodies was all it took. Even though Jonas was shooting heavily there were simply too many Zulus.

The elites of Jonas army comprised of a unit of 60th rifles were really really tough. I charged them twice but never managed to get them into the dirt.

Jonas still had two operational units left and in that sense probably a lot more points on the table.

They fired a few shots on the move while my Zulu…

…were busy hurrying back to the way stations for a final stand.

We ended the game here, as it felt a bit strange moving around almost no figures. I think in the future we should have a sort of leadership/bottle test to see if the one army legs it.
All in all a very fine game I think. The close combat gave us a few quibbles because of the numbers of figures we played with. In one sense the Zulu are good if they get to attack with all their models. But the rules clearly state that only models in base contact or within ½” of the enemy may fight. This is quite limiting when having a horde of poor fighters. But I guess we will have to play a few more games to see what works best. I think we accidentally gave the British a 1” close combat range too but it didn’t matter much.
Thanks to Jonas of deathworldadventures.blogspot.com for playing.