Infuriated by the attack of the Dark Angels a mighty Ork Waaaargh was started.

The Waaargh Chief Skrodinga led his forces against a nearby Imperial Hive City on the equator of Caladrial XI.
Everything went pretty good on up till the point where the Waargh Chief Skrodinga bit a round of lascannon fire and
the whole wave suddenly lost it’s impetus.

The Waaargh quickly dispersed into regular rampaging warbands that scattered all over the Hive. Most of them
were quickly subdued but some kept on fighting in the shadows in a guerilla like fashion. 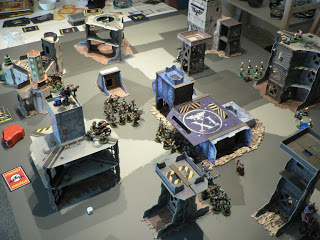 The Orks objective was to seize as many guardsmen in close combat (ie capturing them) or to get enemy vehicles
close to their own board edge and take them out.

The terrain was set up rather symmetrical, but it work nicely 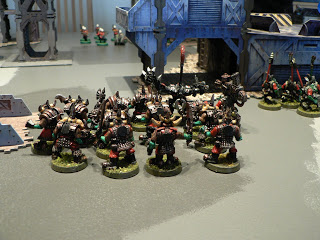 My warboss had taken a suit of mega armour as last outing showed me that a 6+ save isn’t really worth counting on.

—> an enemy psyker managed to drag him out of the squad using assail! The poor Ork was now stood alone
-in front of a heavy bolter, an auto cannon and a lascannon… oh yeah and some guardsmen with flashlights also. 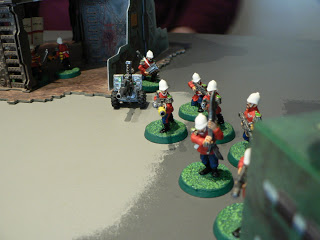 Have a look yourself

All the weapon teams were Dead Eye Shots allowing them to reroll misses. And the whole army had Divine Inspiration (+1 leadership strategy card)

The splatta guns proved to be quite effective weapons this game. They took forever to resolve though as
I was completely unable to roll misfire results. The things kept hopping around the battlefield killed everything
in their path.

I was less fortunate with the rest of my artillery. My Shokk Attack gun [i]did[/i] manage to send some snotlings into the ammo feed
of a heavy bolter team. And my traktor cannon pulled off the assault cannon of the enemy sentinel. Nice! 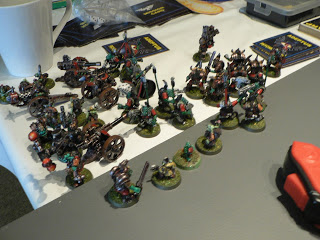 At the start of my 4th and final turn this was what the casualty pile looked like. Orks are not for lasting.

The lone and gunless sentinel was trying to secure yet another objective as the guard mission was to
take the three highest points on the board.

I was desperately trying to get into close combat but it proved difficult… firstly the line I had to follow was
rather bare and a lot of guns were trained on it, so running without shooting didn’t seem like a good option and
secondly the guardsmen kept moving back!

My dreadnought had gotten one of it’s legs damaged so it was only able to limp 1d3 per turn. We decided
that if it charged it would be 2d3 instead. Amazingly it did manage to assault some guardsmen and take out three of them!!!
Hooray for the limping dreadnought.

The rest of the force sat in cover and tried to shoot the enemy away… but the guardsmen were better
at the shooting game than the orks so in the end they won out on that. 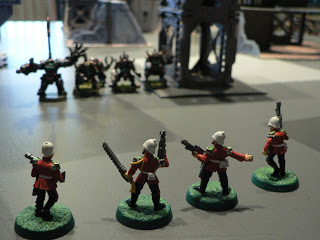 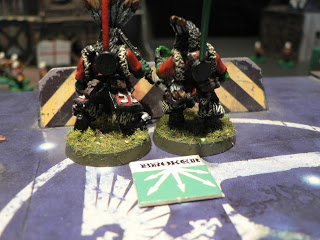 The last of the Snakebites break

We called it a draw. The victory points said something like IG:2 and Orks:1 and then you’d have to factor in all the casualties but we didn’t bother. Looking
at it, it seemed 50/50.